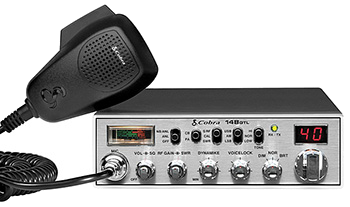 Do you have fond memories of one particular rig? For me, the Cobra 148GTL will always stand out in my memory as a favourite. So why do I have such warm and fuzzy memories of this particular unit? Read on and find out...

Like many CB'ers starting out, I had my introduction by way of a little tinny AM only radio. After a while, I began to find out the wonders of 'skip' and this whet my appetite for a Single Side Band set. Not having a lot of money to throw at my new found hobby, I was on the lookout for a second hand set, but one of good quality, which would serve me well. My quest for such a rig was over the minute I spied a second hand Cobra 148GTL in an electronics parts supplier outlet for $100 as is with no manual or box. Thus began what could be described as something of a love-at-first-sight relationship.

The first thing that struck me at the time was how large the radio is and all the controls on the front panel, no less than 13 of them. Based on size and number of controls, this radio just had to be superior to anything else. Measuring in at 5.8 cm (h) x 18.5 cm (w) x 23.1 cm (d) the unit is pretty large, and would be difficult to fit into any modern day car, but ideal for base station use where size is not usually a problem. It's weight of 2 Kilograms is also a little bloated compared to most radios of the modern day, again a point which may count against it for installation into a vehicle.

The overall appearance of the radio is timeless, classic, some would say dated, with the brushed aluminium front panel with all the chrome controls and other bits. Two crinkle finish black metal case halves fit together with precision, held in place by machine thread screws, and an exceptionally sturdy mounting bracket, which uses four mounting bolts in lieu of the more standard two, which allows mounting at several angles to suit the installation, but does not allow for quick release. The microphone socket is on the left hand side of the radio which is pretty much the optimum worst location. The preference for such a receptacle is the front panel, followed by the right hand side. At the back is the usual SO239 antenna connector and audio jacks for the extension and PA speakers, as well as a power socket of the three pin type which prevents accidentally applying power in reverse.

The front panel is very well set out, with plenty of room for large fingers to manipulate the solid but smoothly operating controls. There is a large and very visible red LED channel display, and a dual colour LED that lights up green for receive, and red for transmit. The front panel also supports a conventional moving needle signal strength/power output/SWR indicator which is a little difficult to view with tired eyes at night, but this can be said of practically all meters of this type. As mentioned before, the 13 controls available will delight anyone who just has to have the absolute control over their CB. Starting at the left, we have the 'Dynamike' control, which is just a fancy name for microphone gain control. Next, there is a stack of two knobs mounted concentrically, with the squelch using the outer ring and a combined volume and on/off switch using the inner knob. Besides this, there is another similar control with the SWR calibrate level using the outer ring and RF gain control for the central knob. Living next door is a three position switch which selects the function of the S/RF meter between its standard function, SWR calibrate and SWR displays. Then there is another three position switch to select between AM, LSB and USB. The last rotary control is labelled 'Voice Lock' which, despite it's name and some claims to the contrary, is just a simple clarifier. The channel selector is located below the display. Above the rotary controls are slide switches which select ANL and Noise Blanker on, CB or PA function, audio tone high or low, and lastly bright or dim display.

Now, lets have a look at the features. The 'Dynamike' control as mentioned before is just a normal, everyday microphone gain control. Having this set at half way gives nice, natural sounding audio, but for added oomph, can be turned up all the way for maximum transmitted audio under noisy conditions. I used to get reports stating that for local communications, some stations actually preferred me to have the mike gain about the half way level because it was slightly easier to listen to.

The volume control operates as you expect it to, although the sound does distort at very high volume levels, but not nearly as much as some radios as I've heard. The squelch operates very smoothly, opening and closing nice and quietly, with no hesitation or indecision. The hysteresis is absolutely spot on to my thinking.

The RF gain control on this rig had caught me out a few times, making me think that the antenna was disconnected or something more insidious had happened, when in reality, it was only that the RF gain had been turned down. Other than that, the RF gain operates well, attenuating signals by up to 40 dB, which takes care of any distortion caused by communicating with a very close by station.

The next control is one that I did not use much, this being the SWR meter. I have always been a bit suspicious of built-in SWR meters, and so I never really took much notice of how accurate the SWR meter is in this rig, but suffice to say it would at least give a go/no-go indication if there was a problem with the antenna.

The AM/SSB selector is pretty much foolproof, and the so called 'Voice Lock' control is really just your garden variety clarifier. I've heard some pretty wild claims about the virtues of this control, all which probably stem from its fancy name. Having said that, the Voice Lock operates as it should, giving a tuning range of about +/- 1 KHz.

Switching in the Automatic Noise Limiter has a very strong affect on AM, with much of the noise being cut out, so much so that you could leave the radio un-squelched in this mode without growing tired of hearing any noise. On SSB, the affect is minimal - that is until you switch in the Noise Blanker, where pretty much any pulse type of noise is given the chop, too. As far as ANL and NB functions go, this is as effective as any I've ever witnessed on a CB, although the ANL does tend to cut a bit of the crispness out of the audio on AM. Another control which can minimise the affect of noise on a signal is the tone control, it can reduce the affect of high frequency hiss and other noise on a signal to make for pleasant listening. I always liked to have the tone set at high unless a really noisy signal demanded that I do otherwise, but this is largely a personal preference. The tone control is a feature that I would like to see on all radios, but so far, this is the only CB that I've had that comes with it.

Lastly, the bright or dim control is meant for mobile users, but I found it useful for those late nights when all the lights were turned out at home, to reduce strain on the ol' eyes.

Well, so much for the features and controls of the radio. I've been saving the best bit 'til last: the performance. The transmitter on this radio really is immaculate. It can deliver the maximum power allowed for CB for seemingly hours on end, with a minimum of fuss or heat build up. The transmitted audio from the easy to hold microphone is superb, the best I've heard from a CB by far. It really is nice and smooth audio, which can be changed to having some 'bite' for those really long distance contacts, all by careful adjustment of the microphone gain.

Similarly, the receiver is excellent. Again, smooth is the adjective that I choose to describe the characteristics of the receiver. The sound produced by the receiver is nice and easy to listen to, even for long periods. It doesn't have any sharp or harsh qualities to it at all, even under the worst noise conditions. A signal that I would have long given up on using another radio would still be an 'armchair copy' using the Cobra. The sensitivity of the radio was also good, and the adjacent channel rejection is, as I remember, very good too. I had a nearby operator who fired his signal into a pretty serious yagi array, and I knew all about it when he did so on any channel on another radio which shall remain nameless, but with the Cobra, I could only detect his presence if I neared the channel he had chosen. The only other sign of distress on the Cobra would be a slight ticking noise, rather than the full-on scratchiness of the other radio.

Looking under the hood reveals all conventional electronic components on a single sided circuit board, which means that servicing this radio would be fairly easy. It is also evident from the quality of construction and the neat wiring loom that some real pride was put into creating this radio. It's the little touches like the use of machine screws and a neat wiring loom that makes this radio stand out from a lesser quality one. The test of time has proven this radio to be a reliable one, with my old radio still in service around here locally, with only one minor fault with the audio amplifier going faulty recently, after an estimated 15 years in service. I've not heard anyone else complain about reliability, either, so that can only be a good thing.

Even with this radio being over 15 years old in design, it still stacks up well compared to modern day CBs, with the modern day Grant-XL having an almost identical design, both within and out, proving the design is still a good one after all these years.

To sum up, this is a really polished product, with smooth, easy to use controls, smooth transmit and receive audio and quality all round. I regret ever having sold it. If you are looking for a top quality second hand CB, but cannot afford the nice sparkling new CBs in the shop window, you cannot go past this one. I promise you wont be disappointed!